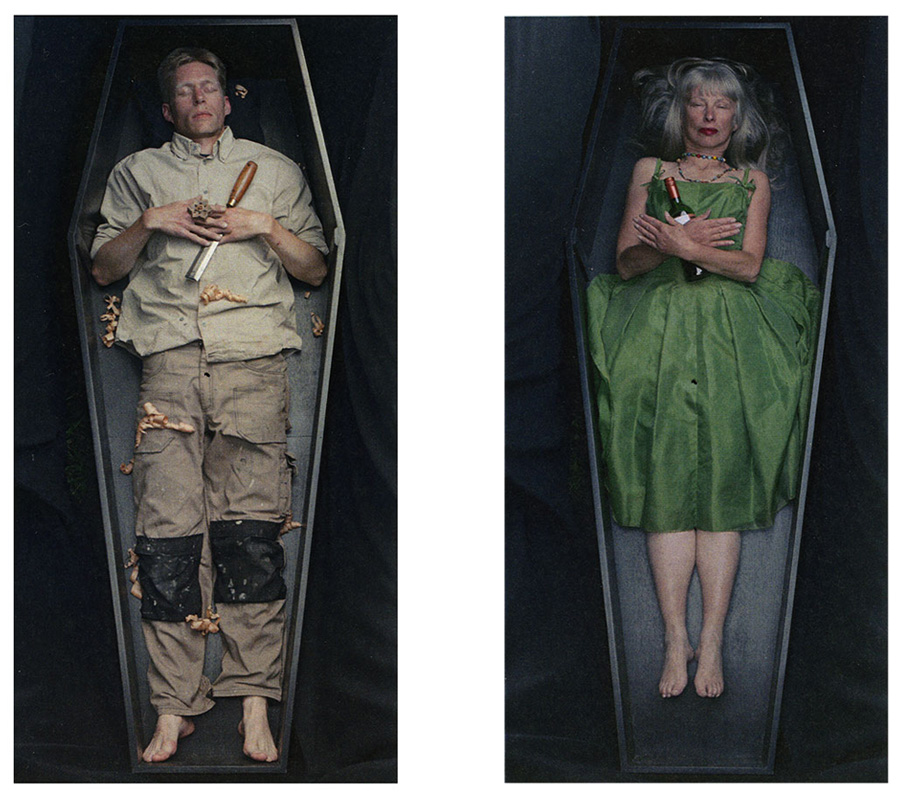 “Ad/dressing Death” is a series of portraits of people posing in a constructed wooden coffin, wearing what they wish to wear on their death. And holding what they wish to take with them. My concept is to address the taboo subject of death, to demystify the fear which surrounds its very meaning and to make visible what is traditionally hidden from sight. The genre of portraiture is my favourite platform to subvert “truth” and to tell stories.

Fascination and fear, discomfort and denial…the concept of death evokes complex and ambivalent feelings from us all. Despite the daily confrontation of imagery about violence spewed out over mass media in print and on screen, the language of death remains ephemeral and defies demystification. We don’t feel reassured by being fed so much visual information, it only emphasises our vulnerable physicality and our mortality. In life, we have our control and our privacy; in death, we lose control and belong to nobody, unless you have deeply religious beliefs. Death and decay, war and disease, crime and punishment… the more images we consume, the more we become insatiable.

The tradition of post-mortem portraiture in painting can be traced back to the Middle Ages in Christian Europe. These paintings acted as memento mori, to remind the living of their mortality and encourage them to prepare their souls, as well as being keepsake for the bereaved left behind. The invention of photography in the mid-19th century carried on the tradition and simultaneously used the new technology to introduce realistic representation of the dead, so that post-mortem portraits appeared to hover in an ‘undead zone’, seemingly alive in dress and pose yet clearly not. Examples are presented in early elegiac daguerreotypes showing dead infants fully clothed and posed, as if asleep in their cots.

Later, contemporary photographers in the fine art tradition such as Andres Serrano (The Morgue, 1990s), Sue Fox and Clare Strand explored post-mortem imagery – as shown in “The Dead” exhibition curated by Val Williams and Greg Hobson in 1996 at the National Museum of Photography, Film & Television, Bradford. The exhibition covered both conceptual notions of death and documentary evidence of violent death. The act of photography has often been theorised as ‘a moment of death’ in that a live subject captured through the lens has been immortalised forever, even though that single moment has died. But the physicality of that live subject at that moment remains forever alive only through the artificial medium of film or printed paper, and through the inherent control of the photography process upon temporal and spatial elements.

My own enquiry into representing death emerged from my recent work about the passing of time in terms of the aging process, inspired by TS Eliot’s “time past and time present are perhaps both present in time future…” This led me to the inevitable question of the end: death. But I do not wish to make post-mortem memorabilia. Nor do I wish to make morbid or macabre images. I am more interested in the ‘undead zone’ in relation to the passage of time; how to represent that which cannot be represented except as an absence? Being aware of photography’s inherent power to capture an instant and subsequently imprint that instant as a permanent living instant, my objective is to imprint a live person with their death in one portrait. How? By posing a live person in a specially constructed coffin as if dead but wearing their chosen garment and holding a precious personal object that they want to take with them. They will effectively be enacting their own version of their death, in the context of the coffin as a theatre stage, enabling them to take control of their ‘death’; to have the ‘perfect death’, while still alive. In this way, time past and time present is conflated to show time future.